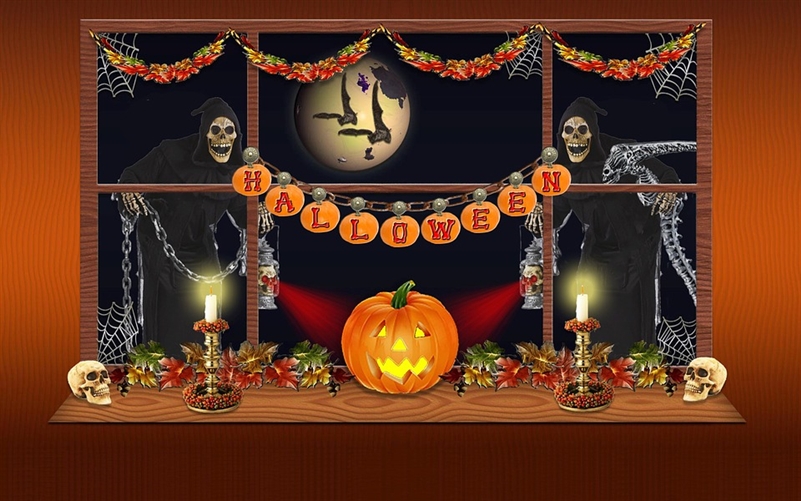 As Halloween draws closer, kids begin to lose a little sleep over making the huge decision about whether to dress up as a Hogwarts student or a superhero. At school, they will congregate to discuss party ideas and which houses always give lame things like pennies and toothbrushes instead of candy. Meanwhile, parents will wonder how many bags of candy they should buy and think about how to keep their children safe on the big night. For many kids, Halloween is about costumes, candy, ghosts, and jack o'lanterns. For Pagan parents, Halloween marks something much more important. But what exactly are the origins of Halloween?

Halloween today is a mix of pagan and Christian practices. Its exact beginnings are buried in the shadows of the past, but it is generally accepted that the holiday we refer to as Halloween was celebrated as Samhain by paleopaganagan Druids and possibly throughout all the Celtic regions.

The Celts divided their year in two parts rather than four seasons as we do today. Summer was from Beltane to Samhain and winter from Samhain to Beltane. Samhain, pronounced "sow-in," means "summer's end." It is often said to have been the most important festival because it may have marked the beginning of the Celtic Year. Samhain also marked the third and final harvest and the coming of winter. Animals were killed for winter stock and the last of the harvest was gathered. It was the time to prepare to spend a long, dark, and cold winter indoors, probably under crowded conditions. But before the winter arrives, it's time to celebrate a bit. The Samhain festival included feasts, animal sacrifices, bonfires, music and storytelling.

At Samhain, people looked at their past, at what they'd harvested that year and the family and friend they'd lost. As the New Year arrived, they looked towards their future. These two themes - the past and the present, endings and beginnings, death and birth - are intertwined in Samhain. It's only natural that a time between seasons, a time between the past and the future, should be considered magical. For the Celts, the veils of life and death became thin and the dead walked among the living during Samhain. These spirits were hallowed, seen as sources of guidance and inspiration, not as dreadful beings.

Over the years, Christianity tried to eliminate Samhain, but had little success. The holiday was eventually assimilated and transformed. Samhain becomes Halloween, All Hallows Eve, and All Saints Day. Today, Halloween is mostly a children's holiday. They celebrate by dressing up in costumes and going to door to door asking for candy. These modern traditions, however, aren't so modern.

Modern trick-or-treating began fairly recently, but it does seem to contain older elements, the most obvious being that people often left food out for the spirits. To supply nothing might result in an angry spirit causing trouble. Beggars and children often took the offerings and eventually homeowners figured it out. Children, who are ever resourceful, then began knocking on doors and simply asking for treats, perhaps offering songs or prayers for the dead in return. During the Middle Ages, it became customary for the poor and children to beg for "soul cakes" in exchange for songs, promises of prayers or protection against bad luck. Failure to supply treats may have resulted in practical jokes.
Rural immigrants from Ireland are largely credited for bringing the custom to 19th century America. Trick-or-treating and practical joking were mostly likely innocent fun then, but as urbanization and poverty increased, practical jokes became increasingly vicious. In an effort to curb pranksters, towns and cities began organizing Halloween events. The phrase "trick or treat" appears in print for the first time in the United States in 1939.

Although considerably more elaborate, the costumes worn today generally serve the same purpose they did in the past – to entertain, amuse, scare, and perhaps compete with others in beauty, ugliness, or costuming skills.

Halloween today is associated with fright. Homes are decorated with images of scary ghosts, skeletons, pumpkins, black cats, witches, monsters and other sinister creatures. The natures of these images are not sinister at all. They have simply demonized over the years in Christian attempts to eliminate the pagan holiday.

A ghost is an appropriate symbol for a holiday that honors the dead. Skeletons and skulls are appropriate also considering Samhain was a festival celebrated by agricultural peoples. They didn't purchase their meats at the local markets as we do. They butchered their own animals for stock and it is likely that animals were sacrificed at Samhain.

Medieval Christians are largely responsible for our modern images and superstitions about black cats and evil witches. For some yet unclear reason, medieval Christians feared cats, especially black ones, which became associated with evil. The medieval church also invented witches as evil figures. The green skin was a twentieth century, Hollywood touch. American pop culture also added new monsters to the cauldron, including vampires, werewolves, and mummies.

The use of pumpkins is a modern custom, but it too has older roots. The Irish did not have pumpkins until they were brought over from the New World. Instead they hollowed out turnips to use as makeshift lanterns. They might have been carved with scary faces to frighten away dangerous spirits. These lanterns were carried during night travels and were left on porches and windows. The use of pumpkins became popular in the United States after the immigration of the Irish people who discovered pumpkins were easier to hollow out and carve than turnips.
Many Pagans today celebrate Samhain as the Witches New Year; a time to make amends with the past and make vows for the future. It is a time to deepen our connection to the cycles of the seasons, remember departed friends and family, and confront our attitudes towards death. It's also a time for fun, to let our inner child out to play, and to pass on our traditions to our children.